When I was a little kid, I knew I wanted to be a cosmologist, like Stephen Hawking. I would tell people that my dream was to have a little office somewhere with a giant blackboard, and I would fill it with equations and solve the mysteries of the Universe. Sometimes I imagined that instead of working in my office, maybe for a change of scene I would sit under an apple tree staring off into the sky, contemplating the nature of reality.


That's not exactly how things turned out. True, there are times when I sit alone in my office and scribble equations. There are times when I sit outside and stare and think. But, to be honest, those times are usually not especially productive. When I really make progress, when I really have breakthroughs -- those are always times when I'm talking to other physicists and astronomers, chewing through new ideas and checking that I'm on the right track. And even more often, the most important work we do is what grows organically from our conversations or e-mails or paper perusals. Sometimes it's hard even to know who should get the credit.


So I was wrong. But I think adolescent-Katie could be forgiven for imagining a future career of solitary contemplation. When we're presented with images of great theoretical physicists, the picture is almost always of a lone genius, hidden away with a blackboard, making leaps no one else could have seen, using nothing but pure, unadulterated mind-power. (That those lone geniuses are almost always depicted as male is the subject for another discussion entirely.) This image has been brought to the forefront once again in the last couple of weeks by the media attention heaped on the mathematical physicist-turned-hedge-fund-consultant Eric Weinstein, whose name happens to be only one letter off from Einstein, which just adds fuel to the media-hype fire. He has a homemade theory of everything, developed over many years by himself, in his spare time, which he is just now announcing to the public. I haven't attended Weinstein's lectures and I haven't seen his work (very few people have so far), so I'm not going to comment on its genius or lack thereof. I also won't comment on the media attention per se, as others have done plenty of that. What I will say is that the W/Einstein lone-genius model of theoretical physics is, nearly always, in stark contrast to how theoretical physics is actually done.


One of the reasons Einstein carries such a hefty cultural weight is that he, like Newton a few centuries before him, appears to have basically single-handedly invented a fundamentally new view of the Universe. Newton did it over the course of 18 months, starting in 1665 while isolated to avoid the Plague, revolutionizing optics and gravity, and inventing calculus along the way. Einstein's turn came in his "annus mirabilus" in 1905 when he published four groundbreaking papers and a PhD thesis. These touched on optics, the size and motions of atoms, and, as you might have heard, the theory of special relativity.


Einstein is frequently depicted as having been completely cut off from the academic establishment during this time, being "just a patent clerk." But although he was certainly not a working academic physicist, he still had connections with the community, people to bounce ideas off of, and a (stalled) PhD-in-progress at the University of Zurich. He had also published several papers, though they didn't receive much attention. And working as a patent clerk was actually a fairly technical job, involving evaluating new ideas and requiring a deep understanding of science and engineering. He is, however, I will grant, probably the best example in the modern era of a theoretical physicist revolutionizing science from outside "the establishment." In fact, he's the only one I can think of.


I asked this question of a colleague of mine while writing up this post, not because I thought he'd have a single answer, but because I was curious what the list might look like. There are a few people who should probably get some credit: Maxwell, who first formulated the basic equations of electromagnetism; Hertz, an experimentalist who helped demonstrate the photoelectric effect; Planck, who was so important to quantum theory that its most fundamental constant is named after him; Einstein, who first explained the photoelectric effect from a theoretical point of view; or Pauli, or Heisenberg, or Bohr, or Nernst, or Schroedinger... there was kind of a lot going on around that time. The point is that quantum mechanics is a great illustration of the fact that it doesn't take a lone iconoclast to revolutionize our understanding of the Universe. Even huge breakthroughs that fundamentally change how we see and do physics can come about through a series of incremental steps. Experimentalists see something odd in their experiments, theorists propose possible explanations, experimentalists go back and test the consequences of that theory and the cycle begins again.

This has happened a number of times since Einstein's era. In addition to quantum mechanics, we've seen the appearance of the Standard Model of Particle Physics, quantum field theory, the concordance model of cosmology (including dark matter and dark energy), and the as-yet purely theoretical frameworks of supersymmetry and string theory. None of these advances could be attributed to one person, nor did they generally involve people working in isolation on theories of their very own.

So how does it usually work?


Physics is, these days, an immensely collaborative field. There are a lot of conferences. There are institutes and workshops and collaboration visits and endless seminars and dissections of research papers. Newly built physics institutes tend to have hallways lined with blackboards or dry-erase-glass cubicles to get people out of their offices to collaborate. We talk to each other, not because we are inherently very social (though a lot of us are), but because it's a really productive way to proceed. Personally, I find I think better when I'm explaining my ideas to someone. Some people, after staring at the same equations for days, just need to get the math written down and show it to other people to make sure it really makes sense. And, even more importantly, we're not all experts on all areas of physics. One person might have spent four years working on a particular quantum mechanical process in the early universe while another might be an expert on strong-field gravitation, and together they can create a much clearer picture of, say, how gravitational waves might be produced right after the big bang. Or two people might have slightly different perspectives on the same subfield of physics, because they were taught by different people or did projects on different things. For whatever reason, it turns out that talking to other physicists is one of the most productive things a physicist can do, if he or she wants to really make a breakthrough. And here I'm just talking about pure theory -- if you want to actually test any of this stuff, to see if it's on the right track for describing the actual universe in which we live, you have to be in touch with experimentalists and observers and find out what kind of tools they have available too.


The way theoretical physics is funded (though keep in mind the funding system has its own problems) is a good clue to what we've found to be successful over time. Unless perhaps you win a MacArthur "Genius Grant," neither grant decisions nor academic hiring are determined solely by how incredibly brilliant you are. They're determined by how much science you produce, how good it is, how much it adds to previous research, and how your advisors and collaborators see your work. "Quality of the Investigator" is only one section of a grant application -- you have to also explain how your work fits in with the work of others at the institute where you'll work, and why it's a good environment for you. I've actually had a fellowship application rejected based entirely on the institute not being "a good fit" -- the assumption being that without anyone to talk to, I just wouldn't be all that productive there.

So, the synergy factor is not to be dismissed. (You would be amazed how many papers out there include in the acknowledgments something like "We thank [conference/workshop] where part of this work was carried out.") Smart people are smarter when they work together.

What about the W/Einsteins of the world?


To clarify again: I have no intention of passing judgment on Weinstein's ideas. It's entirely possible he's onto something incredible, and it's entirely possible the work will lead to nothing at all. It might turn out to solve all the problems of cosmology, or it might already be ruled out by experiment. I haven't seen the paper or heard the talk, so there's really no way for me to hazard an educated guess.

But I will say that if you think you might want to solve the biggest outstanding problems in theoretical physics, I don't recommend the lone-genius approach. Maybe Weinstein had some really good reason not to talk to other physicists about his work before now. Perhaps he was worried it might be wrong and didn't want to embarrass himself, or perhaps he was worried it might be right and he'd be scooped or not get all the credit. Or maybe he just doesn't like to talk to physicists all that much. It's even possible that he thought his ideas were so revolutionary that no one else would understand. But I kind of doubt that. We physicists love finding new ways to think about things. We love stretching our minds and seeing things from another point of view. It's why we do this work at all. And it's why we spend so much time talking to each other about it. 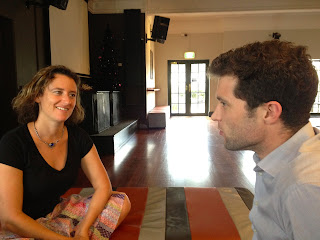 Posted by AstroKatie at 5:16 AM

AstroKatie
This blog is a work in progress. Also, anything written here is my own, not to be attributed to any institution to which I may be associated. Comments/questions welcome.